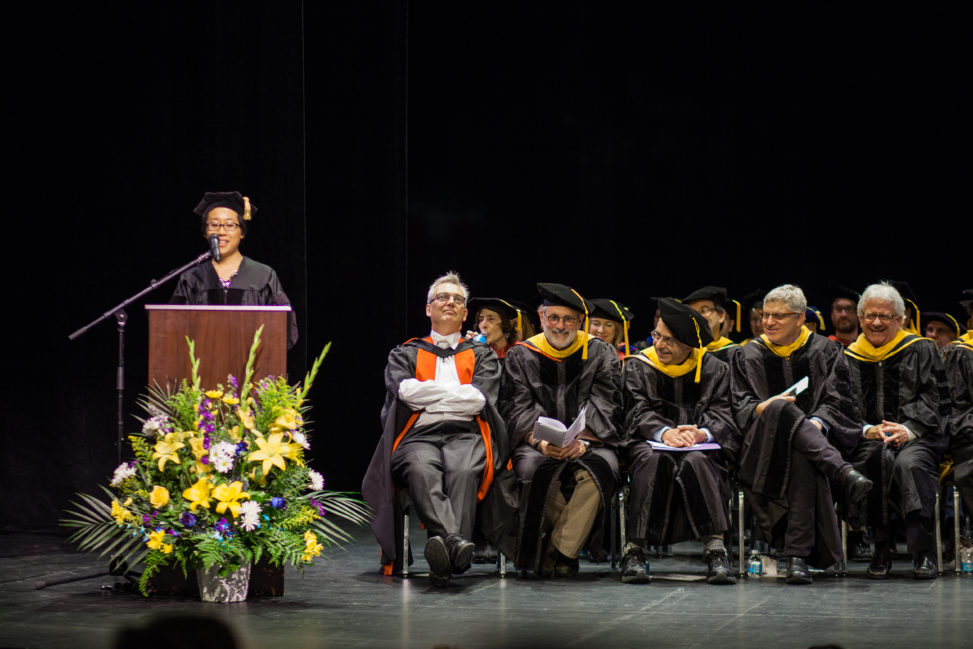 Thanks to some outside pressure (read: no one else wanted to do it), I ended up being the student speaker at the 2016 MCB Commencement Ceremony. I was preceded by the indomitable Stuart Firestein, who had a brilliantly hilarious speech about the twists and turns in his own scientific career, as well as the tenuous nature of scientific discovery – “it’s like looking for a black cat in a dark room…except the cat might not even exist.” It was a tough act to follow, but I guess someone had to do it.

I have to admit I had a lot of trouble figuring out what to say here today. So when I asked around for ideas, I was given two very valuable pieces of advice. First, I was told that there is no such thing as a good graduation speech, so it’ll be ok, you can’t screw it up too much. Second, keep it short. People will only remember your speech if it’s too long.

So, to honor this advice, and to honor the short attention spans characteristic of my generation, I present to you a list of five decidedly un-scientific skills you won’t believe we learned during our PhDs! Here goes:

So there you have it: we thought we were just here to do some pipetting, but turns out we gained some questionably useful skills along the way.

Now, at the end of every science talk, there’s always the acknowledgements, where we thank the collaborators, labmates, funding sources, but they’re always missing the everyday heroes in our lives who allow us to be who we are, many of whom have traveled far to be here with us today: our families, our friends, our teachers, our peers. I also need to acknowledge the administrative staff, who go above and beyond their very limited resources here to make sure that we get the reagents we need, that we can navigate the unbearable mess of BearFacts and TeleBears and bear this-or-that to register for classes, and that we get paid, even if it is very little. We owe you all our utmost gratitude, and also the deepest apologies that we didn’t decide to become the more useful kind of doctors.

We live in an exciting age of new discovery. Here at Berkeley, we’re at the forefront of so many biotechnological revolutions – sequencing, gene editing, biofuels – so many technologies are on the cusp of real change. But we also live in a tenuous time when anti-intellectualism and mis-information are allowed run rampant. This is a time when scientific literacy and education are more important than ever. Many of us will not stay in research. Some of us might not even stay in science. But the high standards of scientific rigor that we have honed here will stay with us forever, and I know that each person here has more than what it takes to make America great again.